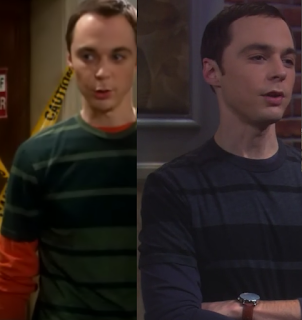 Sheldon actually has as relatively large supply of these darkish, striped BDG shirts from Urban Outfitters. There's gray on black, green on black, black on black, dark purple on a slightly lighter purple, and so on and so forth. None of which are being sold online anymore, so I went ahead and grouped them together here (and undoubtedly grouped similar, non-BDG shirts in here in the process).