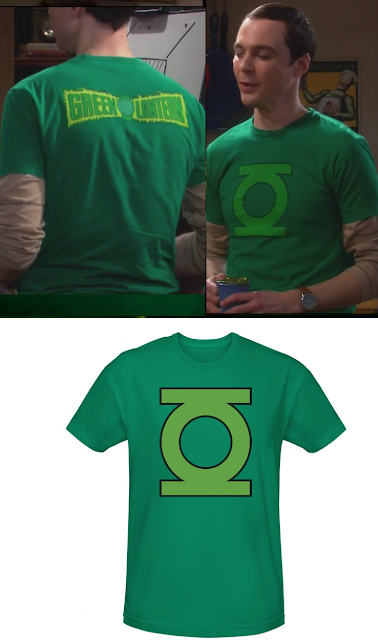 Oddly enough, as simple and seemingly ordinary as this t-shirt appears, it's surprisingly difficult to find online. Most other places across the interweb that sell Big Bang Theory attire are selling only shirts that includes the front portion of the one the shirt and not the back. As you can see in the photo above, though, Sheldon's shirt actually has both the Green Lantern logo on the front and a "Green Lantern" name drawn on the back.

I've tried hunting the precise shirt down but, so far, all of my searches have come up empty. For the time being, I'll just go ahead and jump on the bandwagon with all of the other Sheldon Shirt peddlers out there and offer up this (sorta sub-par) replica.

Anyway. I apologize for sucking. Now here's your crumby product: