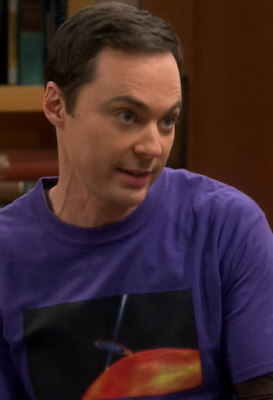 I don't know what the print on this shirt is referencing exactly, but it appears to be featuring a star in the foreground and a galaxy's black hole spewing light in the back. If anyone knows anymore about where this exact picture originates, where to purchase this tee, or wants to correct me on what I thought this was, let me know in the comments below. Thanks!

Our very own master detective, Dave, has struck again, folks, helping us out with this one. 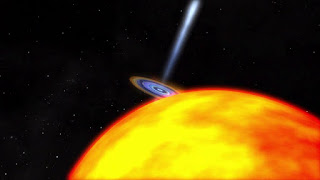 This appears to be a still image from an animation by Goddard Media Studios which compares the "heart beats" of two black holes. The still image itself shows a black hole (within its accretion disc) flaring up from behind a star in the foreground. This particular black hole (named IGR J17091-3624, after the astronomical coordinates of its sky position) also happens to be a candidate for one of the smallest black holes we've ever discovered.

I've yet to find a shirt with this image printed on it, but perhaps now that we know what the heck it is, someone will hook us up with one. Until then, though, why not click here for more information on this black hole, its heart beats, its discovery, and all the rest of that stuff I can't quite comprehend.

And another hearty thanks to Dave for cluing us in on this one. Thanks, Dave!