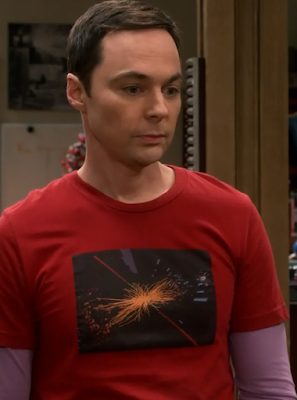 The wormhole from 2001: A Space Odyssey? A Windows 95 screensaver? Your guess is as good as mine (and probably much better). If anyone has any insight into this Sheldon tee, let me know in the comments below. Thanks!

Here we have shirt featuring an image captured from CERN showing events taken place in the Large Hadron Collider.

The exact photo is entitled "CMS-PHO-EVENTS-2011-010-10" (click here for more) with a description that goes as follows:


A typical candidate event including two high-energy photons whose energy (depicted by red towers) is measured in the CMS electromagnetic calorimeter. The yellow lines are the measured tracks of other particles produced in the collision.

The shirt Sheldon wears appears to be a simple print of the above photo onto a plain t-shirt. I haven't yet found another one online and am a bit unsure of the legality of me tossing one together myself from a website such as Zazzle or Redbubble. If you can find someone who's already on top of this, however, let me know in the comments below!

Also, a big thanks goes out to Dave for cluing me in that this shirt had nothing to do with either 2001: A Space Odyssey or a Windows 95 screen saver. Who knew?