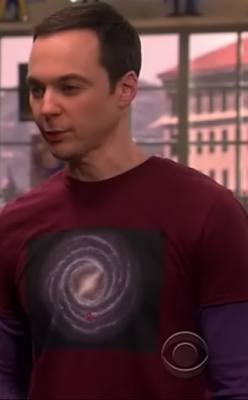 I haven't yet found the location of this shirt but it would appear to be depicting an overhead view of a spiral galaxy (I'm pretty smart, huh?). There also looks to be a small dot on one of the spiral arms, which I'm assuming is pointing out a planet or a solar system. Judging by the position of the dot, I'm also suspecting that this is meant to be a representation of our own Milky Way galaxy with the dot pointing out our little position within it. Whether I'm right or wrong, I still don't know where to get my hands on this dang thing though.