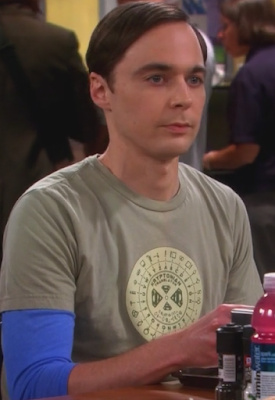 This is one slippery sucker to keep your hands on. At one moment its available at ThinkGeeek.com, then it's not. You find it at TheComicCenter.com, then TheComicCenter.com up and vanishes without a trace. Heck, there was even a point when it could be found on Amazon. Well, not anymore. At the moment, it doesn't seem to exist anywhere. Sheldon actually wears several different colored versions of this same shirt in different episodes of the series. If anyone can clue me into where it's available, I'll be sure to update this. Until then...